Sleeping is an act that we do every day with total ease . But for some people, sleeping becomes a difficult situation, because, during the night, their disorders surface, some of them extremely serious.

In previous articles we already talked about the 7 psychological signs that show that you should sleep more and about a general introduction to sleep disorders . 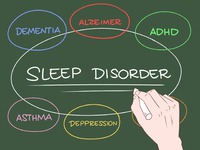 The sexomnia is a sleep disorder that causes people to experience sexual arousal and even orgasm during sleep . Some experts consider it a variant of classic sleepwalking . In some cases, sufferers are aware of their behavior before they seek help, but do nothing about it for fear of what they will think of them.

This pathology has been confirmed by researchers who have even made videos of patients with this disorder, and unusual brain activity has been observed while the acts were taking place. Sexsomnia is a serious pathology for those who suffer from it and for their partners.

The person who suffers from this disorder can behave in a very violent way and in some cases can hurt himself as well as the person with whom he shares the bed. To treat this disorder, anticonvulsant or antiepileptic drugs are usually given. Although clonazepam is usually prescribed which, despite being an anxiolytic, has anticonvulsant effects.

The bruxism sleep is a disorder that is characterized by the presence of involuntary movements of rhythmic masticatory muscle activity (such as clenching or grinding the teeth) and arousal phenomena.

This disorder can cause serious dental problems, facial pain, or headaches, in addition to serious chronic problems. Many individuals with this disorder are unaware of it and only 5-10% develop symptoms of jaw or headache pain.

4. Periodic movement disorder of a limb

The disorder periodic limb movement (PLMD) is like the restless legs syndrome, characterized by unpleasant sensations in the legs and an uncontrollable urge to move when at rest. People often describe strange sensations, such as burning limbs or insects crawling up the inside of their legs.

80 percent of people with restless legs syndrome suffer from this disorder. PLMD can have symptoms in any of the four limbs. Treatment includes anticonvulsant drugs and benzodiazepines.

The night terror is a parasomnia of the awakening characterized by extreme terror and a temporary disqualification to regain consciousness . Many may think that night terrors are the same as nightmares, but the latter occur entirely within REM sleep and produce a full awakening. In contrast, during night terrors, it is almost impossible to wake the subject.

In fact, when you are awakened, you can continue to experience sleep for 10-20 minutes. This disorder can be very harmful to the subject, who can be traumatized or can injure himself or others very severely.

If you want to delve into this topic, in our article " Night terrors: panic during sleep " we explain this sleep disorder in detail.

6. Sleep-wake cycle disorder other than 24 hours

This strange disorder consists of a pathology of the circadian rhythm in which the biological clock of the person is not synchronized with the daily 24-hour cycle , that is, the individual's body does not recognize the sleep-wake cycle. therefore, the person cannot adapt to a regular sleep pattern.

If this disorder is not treated, it causes the person's sleep-wake cycle to change every day, causing serious health problems. Research suggests that most blind people, who do not perceive light, can suffer from this disorder, in addition to having the sleep problems that characterize it.

The apnea sleep is characterized by pauses in breathing during sleep . The pause does not last long, and the individual returns to normal breathing with a loud snore. It occurs in the REM phase and goes into light sleep causing the person not to rest properly.

People who suffer from this disorder are not aware of having breathing problems during sleep, so it is usually discovered by people close to them. It can take years and even decades before it is diagnosed.

The syndrome Kleine-Lane will índrome Sleeping Beauty is a rare neurological syndrome characterized by the need for excessive sleep, sometimes even 20 hours a day . These symptoms are often accompanied by excess food intake and excessive sexual desire (hypersexuality) , compulsive behaviors and negligence in personal hygiene.

There is no specific treatment for this disorder, but stimulant drugs such as amphetamines or methylphenidate are often used to treat excess sleepiness. Sometimes, due to the similarity of this disorder with other mood disorders, lithium and carbamazepine can be used.

The somniloquy , noctilali to is a disorder that is characterized because the person who suffers speaks when asleep . You can speak very loud, from saying words to saying long sentences, and the listeners may not be able to understand what the person is saying.

Although talking in sleep is very common, chronic sleepiness in adults is considered a sleep disorder and is believed to be the product of prolonged exposure to tension, physical and mental fatigue, or high levels of stress.

The Narcolepsy is a disorder characterized in that the person suffering this psychopathology has episodes of sudden sleep waking hours and can stay dormant for 2-5 minutes anywhere.

Narcoleptics wake up feeling clear. It can happen anywhere: in line to the cinema, talking to or while out for a walk. These individuals lack slow wave sleep and go straight into REM. For its treatment, a drug called Xyrem is usually given, which is better known as liquid ecstasy or GHB .