Mr. P. was an eminent musician who had seen a neurologist's office because he had trouble identifying things around him. On some occasion he had been caught patting the tops of fire hydrants, believing them to be little heads of children or initiating a conversation with a door handle. After the review, Mr. P. left the consultation. Suddenly he stopped short, walked around the car and went to the seat his wife occupied, grabbed her by the collar of her shirt and by the ears and tried to put it on her head.

This is a true event commented on by the famous neurologist Oliver Sacks . In this specific case, Mr. P. suffered from acute cognitive loss : his brain was able to see, hear, feel and hear perfectly, but he could not make personal judgments. Thus, he put his wife in the same conceptual category as an umbrella or a hat.

Classification of the most curious Mental Disorders

A disease that usually occurs when there is some type of neurological brain damage for which a patient is not aware that they are suffering from any type of dysfunction, even if it really exists. A case of this can be when a patient sees his arm paralyzed, but thinks it is moving. If he is asked to tie his shoelaces, he will try to do it with one hand, believing that he is using both, and obviously he will not be able to finish the task, but he will believe that he has accomplished it as if he had two useful hands. 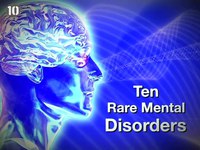 Usually a consequence of chronic alcoholism. It is a brain injury that causes amnesia . The patient is unable to remember new events or experiences, his short-term memory is severely affected, he only remembers old events, prior to the disease. The person believes that he is the age he was when this disease began and thinks that he is living at that time. Everything you do today is quickly forgotten.

It is a disorder of the ability to identify . The patient sees the face of his spouse, for example, and is sure that he is an impostor. It seems to be due to some disconnect between the physical mechanism of visual recognition and affective memory. The subject sees a familiar face, but does not experience the affective reactions corresponding to the vision of a loved one, so he interprets that he is an impostor.

It is one of the most serious so-called fictitious disorders. The patient pretends to suffer illnesses by ingesting harmful products and even injures and mutilations are practiced to attract attention and thus benefit from the supposed advantages of being cared for. When the patient does the same with loved ones, such as their young children, the disorder is called Münchausen syndrome by proxy .

People with this disease suffer from compulsive tics that can be of all kinds, from simple facial movements to vocal tics . In the latter case, the patient is unable to control the sounds and words he emits. Sometimes the subject says tacos uncontrollably in any situation, which is called coprolalia. One out of every 200 individuals with chronic tics may suffer from this genetic disorder.

It is a disease that suffers about 1% of the population. The patient compulsively plucks hair from any part of the body : head, eyebrows, chest, pubic area ...

Patients appear totally blind to at least part of their visual field . If they are asked if they can see an object in that area, the answer is negative. But if they are forced to point out where that object is, it will indicate the correct place. Somehow, their visual mechanisms have been disrupted. They can see, but they are not conscious of it.

There are less than 100 localized cases in the world of this strange disorder, which arises when various connections of the language control centers on the left side of the brain are damaged. Some patients generate a completely different language pattern than their own . On certain occasions, the individual ends up speaking with an accent different from that of her country or an unrecognizable language, a product of the mixture of several languages with which she has had contact.

An uncommon variety of blindness. The patient sees static objects well, but does not perceive movement . If you pour the coffee into a cup, you can easily catch the coffee pot, the plate, the cup... but the jet appears before your eyes like a frozen column and immobile. It is a disabling evil. Cars, people, television images suddenly appear and disappear at different distances, but are lost as soon as they move. The few known cases have occurred after a cerebrovascular accident.

Thrones of mind from other countries or exotic

It occurs on the island of Java and Indonesia , it is a disorder in which the individual, after suffering a strong social shame (generally occurs in men), begins to run incessantly destroying everything in its path, even killing animals and to the people they stumble across. Normally the rest of the population ends up killing him for being a danger, but those who survive show total amnesia about what happened.

The "Wild Man" syndrome occurs in Papua New Guinea . It is a language disorder that only appears in men between 30 and 35 years old, who begin to speak disjointedly, saying strange things. The population shouts that this man has transformed into a wild man, they surround him and pretend that they fear him. Finally the man ends up marching to the jungle, but on his way he commits small thefts in other towns and these stolen things are scattered throughout the jungle. After a few weeks, he returns home as if nothing had happened.

It is a type of mental disorder that only occurs in China . The patient believes that his penis is progressively reducing until it invaginates in the abdomen and causes death. In 30 or 40% of cases the patient has an associated depression, but the rest do not have any other pathology. The patient can die from this disease.

It is a characteristic disorder of India, also called seminal loss syndrome, affects up to 15-20% of users of primary centers. In Ayurveda medicine it is believed that people are made up of four fundamental humors, and one of them is semen. These humors are not regenerable and have a limit, so that men throughout their life go through several stages, and in the last one they can no longer have sex. Men who have many relationships lose semen and age earlier, but women who receive it, become more and more rejuvenated. The Dhat is the problem in which the man is left with very little semen and manifests itself with chronic fatigue, doctors recommend that they do not have intercourse, that they rest and eat well. They also believe that if the urine is clear, the semen escapes from there.