Introversion is an attitude characterized by the concentration of interest in the subject's internal processes. Introverts develop a potential interest in their thoughts and feelings, in their inner world. On the other hand, their counterparts, the extroverts, have an attitude whose interest is developed around the external world, in people and things, they are more sociable and more aware of what happens in their surroundings. 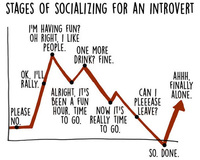 Society has led us to think that these personalities are good or bad. In general, the extroverted personality has been classified as "positive" while the introverted personality is taken as "negative". The reality indicates that, in the first place, both of them have advantages and disadvantages and that neither is better than the other due to the same strengths and weaknesses that characterize and differentiate them.

Recognizing introverts is not always as easy as is often believed, many may pass as "extroverts". Very often, some people don't even realize they are introverts, especially if they are not shy. Habitual thinking indicates that shyness must be rooted in the introverted personality, which is not a reality.

A more assertive factor that can help you identify whether or not you are an introverted person is the gain or loss of energy after being around others, even if you can enjoy the company. In other words, introverts "recharge batteries" in solitude and lose energy by being in crowds.

Despite the growing conversation around introversion, it remains a frequently misunderstood personality trait. The American Psychiatric Association even considered the classification of "introverted personality" as a disorder by including it in the Diagnostic and Statistical Manual, which is used to diagnose mental illness.

More and more introverts are talking about what it really means to be a "quiet guy." In order to be sure whether or not you are an "intern" here is a list of the signs by which an introvert can be identified:

Introverts have a kind of "phobia" about small talk, as they consider it as a source of anxiety or annoyance. That does not indicate that introverts hate people, the reality is that they detest the barrier that can be created between people after these "short talks".

2. You go to parties but not to meet people

You may like to go to parties, however, your purpose is not to meet new people. The reason that drives introverts to go to parties is to spend a pleasant time with people they already know and with whom they feel comfortable. If the case of meeting a new person and connecting with it occurs, excellent, however this is not the priority.

3. You feel alone in the crowds

Introverts can often feel like real strangers in the midst of groups of people, even though these are people they know.

4. Social work meetings, which aim to promote your career, may feel "false"

Small talk or social interactions whose goal is to advance your career, may come to be considered by introverts as "particularly insincere." They crave authenticity in their relationships.

5. They called you intense

You have been deemed too intense for having a penchant for philosophical conversations and for loving books and movies that lead you to think or reflect.

6. You are easily distracted

While extroverts get bored when they don't have too many tasks to do, introverts are easily distracted and overwhelmed in over-stimulated environments.