Melancholy is a type of serious major depression , whose origin seems to be, above all, biological. Although it can improve thanks to a combination of drug treatments and psychotherapy, it is considered a chronic disorder and is linked to a high number of suicides. In the most severe cases, which do not improve with medication or psychotherapy, electroconvulsive therapy is sometimes used. Here are some things about what causes melancholic depression and how to fight it .

Depression is the most common mental disorder of this age. This psychiatric illness is classified according to its level of severity.

One of the most serious is the major depression , which are particularly prevalent mood symptoms, such as pathological sadness , the irritability , the subjective feeling of discomfort or decay . The person has frequent negative thoughts and may suffer from somatic problems, such as difficulty sleeping .

But in the case of major depression, there is a subtype that is very serious . It is melancholic depression or melancholy. This is characterized by the following symptoms: loss of pleasure in all or almost all activities; lack of reactivity to stimuli that would normally be pleasant; increased feeling of discomfort in the morning, when the person wakes up very early - called " third-stage insomnia " - and in a state of alert; weight loss ; psychomotor slowing or agitation ; and excessive or inappropriate guilt bordering on delirium .

What is the cause of melancholic depression? 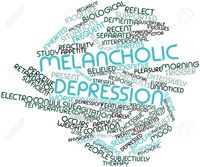 One of the most relevant aspects of melancholic depression implies that it is a disorder that does not respond to a vital situation of the person who suffers it. Rather, it is a tendency for certain people to fall into periods of melancholy, in which it costs them enormous effort to function in their daily lives in an acceptable way or they do not succeed.

Lack of reactivity to stimuli, insomnia, weight loss and guilt bordering on delirium are symptoms of melancholic depression

For this reason, it has been considered probable that the origin of this serious pathology is biological, since vegetative symptoms predominate , such as waking up very early in the morning or loss of appetite and weight, which can lead to anorexia. The autonomic or vegetative nervous system is the part related to the regulation of the functions of vegetative life (such as respiration, digestion, blood circulation, etc.) and that, therefore, are not controlled by the will.

Another of the tests that seem to support the hypothesis of the biological origin of the disease is that people who suffer from it respond better to a type of antidepressant, tricyclics -one of the first used to combat depression-, than people who they suffer the non-melancholic way.

Due to the severity of this disorder - which is related to a high risk of suicide among those affected - it is vital to initiate specialized treatment. For this reason, it is necessary to take antidepressant drugs . The most widely used are tricyclics and selective serotonin reuptake inhibitors .

But it is also important that the person undergo some type of psychotherapy so that they learn to face their negative thoughts and their ideas of guilt. In the most severe cases that do not improve with medication or psychotherapy, sometimes electroconvulsive therapy or "electroshock therapy" is used.

Hippocrates (460 BC-370 BC) is considered the first doctor in history who tried an approach to medicine outside of the superstitions and myths of his time. He used the term "melancholy" to refer to a disease that is due, in his opinion, to the imbalance of atrabilis , one of the four bodily humors. In this way, in his 'Aphorisms' he quotes: "When fear and sadness last a long time, then it is melancholy."

For many centuries, the theory that melancholy was due to an imbalance of this bodily mood was the predominant one. After many vicissitudes, in which even the Catholic Church considered that the cause of melancholy was due to some sin, the Viennese psychiatrist Sigmund Freud published, in 1917, one of his most relevant articles: 'Duel and melancholy'. In it he established the difference between grief and melancholy.

For Freud, the cause of grief would be the actual loss of someone , that is, a separation from a couple or the death of a loved one, among others. On the other hand, in melancholy, the loss is more emotional than real. The person who suffers from it has very low self-esteem and feels very guilty , while the person who suffers a pain (or experiences a grieving process) does not always have their self-esteem affected.