The most obvious symptoms of people suffering from masked depression are neither sadness nor melancholy. They complain, above all, of other health problems, such as back pain or general fatigue, signs that often confuse the doctor. This delays the diagnosis and the start of adequate treatment, with the danger that this disorder will become chronic. It can also affect the child population and hide behind aggressive behavior, learning disabilities or headaches. This article explains the different symptoms that those suffering from masked depression may suffer, be they children, adults and the elderly.

Masked depression is a silent form of illness, but it can be devastating to a person's emotional and physical health. This disease is one of the main health problems in today's society. Most people are familiar with their most characteristic symptoms: apathy, sadness, sleep disturbances, loss of appetite, decreased sexual desire ... These are signs that affect the psychological sphere, but can also have physical manifestations.

Silent depression: what are the symptoms? 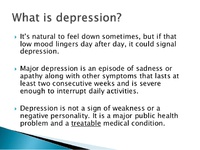 A silent or somatoform depression is expressed, above all, with physical symptoms, which can conceal the psychological ones. The most common manifestations of this condition, such as sadness, are hidden by other signs more associated with physical disorders, such as headaches, pain, paresthesias, dizziness, cardiac disorders and digestive problems. When the person suffering from these symptoms goes to their doctor Primary Care, the specialist focuses on them. Many patients don't even verbalize that they feel especially sad or listless. And when they do, since their main complaint is physical, it is common for the doctor to infer that the psychological alteration is caused by the physical problem and not the other way around.

Up to 10% of patients who come to Primary Care have symptoms of depression and it is estimated that they go unnoticed in up to 50% of cases. This supposes an unnecessary sanitary cost in erroneous treatments, at the same time that the person is prevented from recovering quickly their physical and psychological health. For this reason, somatoform depression is referred to by many as the "specialist frustrator." Patients wander from one specialist to another, waiting for someone to find the source of their discomfort.

On the other hand, when a doctor suspects that behind the physical complaints there might be a masked depression, he detects an added problem: the patient's resistance to accept the diagnosis. People who suffer from this disorder often do not connect well with their feelings and emotions. In advanced societies, physical symptoms are better accepted, less stigmatized than psychological ones. It is easier to say that your head hurts, than to recognize that you are sad and lonely. Therefore, one of the pathways that the disease chooses to manifest is the physical.

As a consequence, if the affected person takes a long time after a diagnosis without attending to the true nature of the problem, the disorder is likely to become chronic. Instead, psychiatrists know that according to some studies, 70% of people who suffer from depression start the disease with physical symptoms. Once the correct diagnosis is made, both physical and psychological discomforts improve with treatment.

In the elderly, the symptoms of depression may be masked by the normal aging process

Children and the elderly, a covert disorder

This type of depression also affects children. The most characteristic symptoms are: hyperactivity, aggressive behavior, antisocial behaviors and learning disorders. It is typical that the youngest ones complain, above all, of belly pain and headache or that they show alterations of the mood, typical of the habitual depression, that cover the previous manifestations.

For much of the past century, depression was not viewed as a childhood disorder. When it was found in 1972 that even the youngest could suffer it, childhood depression was baptized as masked depression by psychiatrists Leon Cytryn and Donald H. McKnew. Currently, it is accepted that children can suffer from this type of silent illness, as well as another form of depressive disorder.