Obsessive Compulsive Personality Disorder (OCPD) ... What is it? video

Obsessive Compulsive Personality Disorder (OCD) , not to be confused with Obsessive Compulsive Disorder (OCD), is a type of mental disorder that characterizes people whose cravings to make all the pieces of their lives fit together perfectly have been taken to the extreme. Somehow, it can be said that the problem is in a kind of vital perfectionism pushed to its limits.

Normally, in this class of patients they feel the need to have total control over how the events of their life unfold, and this causes them to experience a lot of anxiety and anguish every time the plans do not go as planned, which it happens very frequently.

Next we will see what are the symptoms, causes and main treatments proposed for Obsessive Compulsive Personality Disorder.

What is this disorder?

The concept of Obsessive Compulsive Personality Disorder is a diagnostic category used in manuals such as the DSM-IV that is used to define what happens in a type of people whose perfectionism and need for control over their own lives have been accentuated so much that they it produces a lot of discomfort and deteriorates their quality of life.

People with Obsessive Compulsive Personality Disorder experience an obsession with doing things the way they should be done, without experiencing dissonance between their plans and what is actually happening. 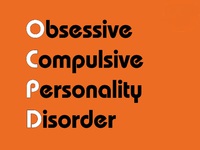 The diagnosis of Obsessive Compulsive Personality Disorder , like that of any other mental disorder, should always be carried out by duly accredited mental health professionals, and through personalized case-by-case evaluation. However, as a guide, this list of symptoms can be used to help detect this disorder.

The main symptoms of Obsessive Compulsive Personality Disorder are as follows.

This manifests itself in practically every aspect of life. For example, the person plans very precise schedules that cover everything that must happen throughout the day, creates rules for all kinds of social events, decorates the spaces following very clear rules, etc. This attention to detail comes to overshadow the main purpose of the actions.

2. Rejection of the possibility of delegating tasks

People with Obsessive Compulsive Personality Disorder tend to frown upon the idea of ​​delegating tasks to other people, as they distrust their ability or willingness to follow exactly the instructions and rules about how to do things.

Another symptom of Obsessive Compulsive Personality Disorder is the tendency to displace leisure and rest time to occupy it with tasks that are considered productive and that have a clear beginning, a series of intermediate steps and an end. This generates great exhaustion and increases stress levels.

In personal life, the morality of people with Obsessive Compulsive Personality Disorder is so rigid that it focuses more on the formal aspects of what is considered good and bad than on an in-depth analysis of the ethical implications of one action or another. .

The need to make everything go as planned causes many tasks to take too long , causing them to overlap with other plans. This mismatch in schedules creates intense discomfort.

This type of diagnosis is associated with a tendency to save and accumulate ; very little money is spent and objects are preserved whose future usefulness is unclear. This has to do with the need to know that there are means to face future problems and with the extreme need for stability.

Patients with Obsessive Compulsive Personality Disorder are unlikely to change their minds , as their belief system is rigid and offers stability.

This means that this class of patients does not decide to go to therapy to treat this problem, but to try to solve the problems derived from the symptoms, such as anxiety and fatigue derived from the implementation of their habits.

In contrast, in OCD, obsessions are not perceived as something that forms part of one's own identity . Furthermore, in this disorder the compulsions are of a specific type, and the rigidity does not permeate all aspects of one's life.

People who present symptoms associated with Asperger's Syndrome , now subsumed under the category of Autism Spectrum Disorders , differ from those who experience OCT in their difficulties when carrying out mental processes related to the theory of mind (like reading between the lines, detecting sarcasm, etc.) and in their bad social skills, mainly.

As in all personality disorders, the specific causes of Obsessive Compulsive Personality Disorder are not clear, as it is a complex and multi-causal psychological phenomenon , based on variable and constantly changing psychosocial mechanisms that, however , they generate very stable and persistent symptoms over time.

The most widely accepted hypothesis about the causes of OCT is based on the biopsychosocial model, so that it is assumed that its origin has to do with an interrelation between biological, social and learning elements that have been internalized by the person.

When it comes to alleviating the harmful symptoms of POST , attendance at psychotherapy sessions is recommended . The cognitive behavioral therapy can help change the habits and thought patterns based on extreme rigidity, to detect times when perfectionism is reducing quality of life and to introduce more leisure time and rest in the day.

In some cases, medical personnel may recommend and prescribe psychotropic drugs to be used in a controlled manner and only under medical supervision. In this sense, the use of a type of antidepressant called selective serotonin reuptake inhibitors (SSRIs) has proven effective in many cases if its use is accompanied by psychotherapy.