Perceptual distortions are phenomena that alter our ability to perceive the environment in a realistic way. Do you want to know what types of distortions exist and how they can be classified? Do not miss it! 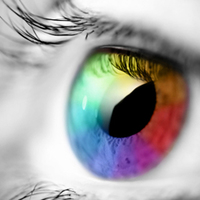 Surely you have ever heard this phrase: The mind deceives us! Or perhaps it is our senses that do it? In this article we will know what perceptual distortions are, also called sensory distortions. These are perceptual anomalies in which a real stimulus from outside is perceived differently than expected given its formal characteristics.

There are different types of perceptual distortions that can be classified according to a series of parameters, such as: intensity, quality, size, shape ...

These two phenomena make up the so-called psychopathology of perception, an area of ​​psychopathology that has always aroused great interest among researchers. Do you want to know what are the types of perceptual distortions and how do they work? Here we will unravel the mysteries of this curious and complex sensory-perceptual phenomenon .

According to the Belloch, Sandín and Ramos (2008) manual, the different types of perceptual or sensory distortions can be classified according to five parameters:

Let's see what denomination each of the distortions receive according to their typology, what characteristics they present and what are some of their examples.

According to its intensity

They are those perceptual phenomena that imply an anomaly in the intensity with which we usually perceive the environment (for example, sounds). In this case, the quality of the stimulus is maintained, but to a different degree. In this group we find three types of perceptual distortions:

Hyperesthesia can be defined as a perceptual condition that involves increased sensitivity to stimuli. That is, there is an excess of sensitivity. Hyperesthesia generally affects the sense of touch, but also the other senses such as hearing.

On the other hand, hyperesthesia can also lead to an increase in pain perception . Examples of hyperesthesia would be: perceiving the ticking of the clock too high or noticing the taste of sugar as excessively sweet.

In contrast, hypoesthesias are perceptual distortions in which there is a decrease in sensitivity to stimuli.

According to its quality

According to the quality of the perceptual distortions we find those that affect, as its name suggests, the quality of the stimuli. That is to say, they imply a change to another quality ; for example, perceiving sugar as salty, seeing it all black or that the flowers smell of excrement.

They are usually associated with distortions in intensity. On the other hand, we should not confuse this type of distortion with gustatory or olfactory hallucinations.

According to its size and shape

On the other hand, if we perceive the smallest or furthest object from reality, we speak of micropsies. Finally, the autometamorfopsias are the distortions referred to the own body , in form and size (for example perceiving ourselves taller and elongated).

Dysmorphopsias have to do with form; They are classified into:

An example of dysmorphopsia can be seen illustrated in Dalí's Soft Clocks.

According to perceptual integration

This quality refers to the union or separation of the stimulus. Thus, when the stimulus is perceived as fragmented or separate, we speak of a perceptual split. On the other hand, when we perceive it merged with another, we speak of an agglutination.

In perceptual divisions we perceive that objects are separated from each other, when in fact they remain united. If the separation occurs in the form of the object, then we speak of morpholysis; on the other hand, if it occurs between a color and a shape (perceiving that the color separates from the object, for example), we speak of metachromia.

An example of perceptual cleavage would be to see the hands of the clock separated from the numbers.

Perceptual distortions involving clumping are called synesthesia . Someone with synesthesia involuntarily experiences the activation of an additional sensory or cognitive pathway in response to specific stimuli. An example would be perceiving colors when listening to music.

Optical illusions are also perceptual distortions. In this case, these are anomalies in the structuring of ambiguous stimuli; in other words, it is an illusion is the wrong perception of a specific object .

There are two kinds of illusions: pareidolias (when a vague and random stimulus, for example an image, is mistakenly perceived as a recognizable form) and the sense of presence (feeling that someone is physically close to us, when in reality we are not it is).

Examples of illusions would be: the faces we see drawn on a bonfire or having the feeling of not being alone when we really are.

"Perception is real even when it is not reality."