What if I am attracted to people of the same gender?

Are my emotional failures due to the fact that I am actually homosexual? These types of thoughts, when they become recurrent and limiting, define a very specific type of disorder. 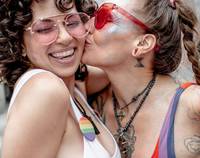 Homosexual OCD defines a situation in which a person experiences constant doubts about their sexual orientation . That insecurity and that persistent doubt becomes an obsession capable of altering the relational, personal and work environment.

The mind is filled with intrusive ideas and images that further fuel doubt, to the point of leading to compulsive behaviors to alleviate that anxiety.

This condition, as peculiar as it may seem, can occur in more cases than we think. It begins between the ages of 18 and 20 and can completely condition the life of those who suffer from it . He does this to the extreme, for example, of avoiding certain situations such as going to the gym or feeling excessive discomfort with people of the same sex at work.

Now, let's clarify. This condition refers to those men and women who, being heterosexual, suddenly fear being homosexual. However, this does not demonstrate any homophobic behavior. We speak of a psychological condition defined by an irrational fear, there are therefore no variables referring to social prejudices .

Let's understand a little more about this type of disorder.

Homosexual OCD can be basically defined as a type of obsessive-compulsive disorder based on an excessive and irrational fear of becoming or being homosexual . Subjects (heterosexual) experience a series of intrusive and unwanted mental images of homosexual ideas and behaviors.

It may seem contradictory to us and that, seen from the outside, we do not fully understand why someone can suddenly obsessively question their sexual condition. Well, something we must understand is that these types of mental conditions based on obsession and compulsion, such as love or relational OCD , are more complex than we might believe.

To this day we know, for example, that there are different alterations in brain connectivity. Studies , such as those carried out at the Bellvitge Biomedical Research Institute (Barcelona), indicate that those situations in which, suddenly, an idea becomes an obsession may be due to a dysfunction in the synchronization of activity between different groups of neurons .

What symptoms or manifestations does it present?

The key element that defines this type of psychological condition is the fear of being attracted to something unwanted. This means, for example, that this type of obsessive-compulsive disorder could also be suffered by a homosexual person who would fear, from one day to the next, that he was actually heterosexual.

We start from a fact, and that is that when one already has assumed their sexual orientation, suddenly, when they reach 18, 20 or 25 years old a senseless and irrational fear emerges : " What if I have been thinking all my life that I am straight? And am I really gay?

What are the causes of homosexual OCD?

The origin of homosexual OCD is not due to a repressed sexual identity. We are basically facing an anxiety disorder. They are situations in which the person becomes obsessed with an idea and feels unable to handle that image. There are different types of OCD and many of them do not have a specific trigger or cause to explain it.

However, the mechanism by which an idea is installed in the mind and alters behavior and cognitive and emotional focus would have a neurological origin. Be that as it may, these conditions are based on an intense and latent anxiety that intensifies this obsessive and pathological behavior.

How is this type of obsessive-compulsive disorder treated?

The approach to homosexual OCD will always depend on the particular needs of each patient. In more serious cases, it will be necessary to combine the pharmacological approach ( fluoxetine ) with the psychotherapeutic . Thus, the most common and effective approach in these cases is the following:

To conclude, point out that it is important to receive specialized help in this type of situation based on obsessive compulsive thoughts and behaviors. They are conditions that completely alter the functionality of the person and that, in addition, tend to intensify over time until they lead to more problems, more psychological comorbidities.